Who was George E. Keith?

Keith Park is named after George Eldon Keith, a shoe manufacturer, a caring boss, an engaged citizen, and a generous philanthropist. His family homestead stood on the Keith Park land in the 1880s. Mr. Keith’s exceptional life is summed up in the Plymouth County biographical archives, written at the turn of the century, this way:

"He is deservedly popular in the highest sense, having hosts of friends who regard him as a gentleman of ability, strictest integrity and incorruptible character. Between the lines of this notice may be read evidence sufficient to show Mr. Keith's standing in the community, his worth as a citizen, his enterprise and public spirit, and the city of his birth may justly feel a pride in his life's achievements. He is essentially a self‐made man, and well made, and his success is due to an intelligent application of his energies to his chosen calling, and his life an example well worth following by the young man of to‐day."

Here is a brief summary of his life, which we hope will shed light on why Keith Park is such an important part of our Brockton and Campello history and deserves to be celebrated, cared for, and passed on to our next generation. It is our hope that the Keith Park Neighborhood Association will bring our community together to honor the past, celebrate the present, and plan for our future.

The Keith family emigrated from Scotland to Bridgewater, Massachusetts in 1662. The Reverend James Keith became the first minister in that town. 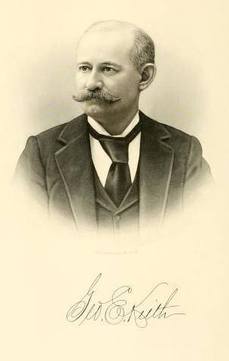 George E. Keith
In 1758 his great‐grandson Levi built a small addition to his house, called the "ell", where he ran a tannery and made shoes.

George Eldron Keith was the son of Franklin Keith. In 1874 George invested $1000 into a brand new shoe manufacturing company. He hired 10 employees. That was the start of a shoe corporation that eventually became one of the premier manufacturers of quality shoes in the world. According to the history page on the Walk‐Over Shoe Company’s current website:

"Mr. Keith's vision, energy, and innovation were unprecedented in the shoemaking industry. Surrounding himself with dedicated employees, he built a company based on respect for all with whom he dealt. As he said, "No person ever attained success by creating enemies."


George Eldon Keith was born on February 8, 1850 in Brockton – which was then called North Bridgewater. He was a member of the first class of the high school opened in 1864. Early mornings and evenings were spent learning the shoe trade from his father, mid‐days were spent in school. Ten years later, on July 1, 1874, he went into business with a Mr. William S. Green. He and Mr. Green used George’s father’s old factory to make their shoes under the name of Green & Keith.

In 1880 Mr. Keith sold his half of the business to Mr. Green. But this was not the end of his interest in the shoe making business. According to the Plymouth County Archives Biography: 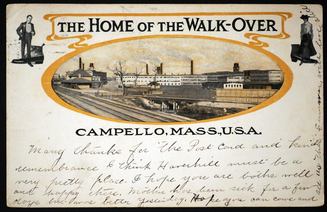 "He at once erected a large factory building on Perkins Avenue, in which he continued in the manufacture of shoes on a much larger scale. This factory was the nucleus of his present extensive and eminently prosperous business, and from this small beginning, his first six months' sales amounting to a little over $7,000, the business has grown steadily and rapidly until to‐day the George E. Keith Company, incorporated, of which he is the president, is the foremost and most extensive shoe manufacturing concern in the State if not in the world, the sales in 1910 amounting to $12,000,000, and the payroll reaching $3,000,000."

The manufacturing complex on Perkins Avenue grew to seven buildings. In addition Mr. Keith had plants in Middleboro, North Adams, East Weymouth and Boston. The business produced about twenty thousand pairs of shoes a day that were sold in "Walkover" salesrooms all over the United States and Europe. At one point there were nine stores in London alone! 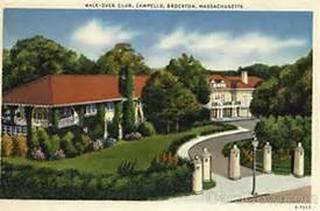 Because Mr. Keith once worked at a bench with his hands, it is reported that he treated his employees with consideration and respect. Many accounts cite the extreme loyalty of his workforce. From providing a low cost mid‐day meal to his workers, to setting up a fund for anyone who became ill and needed assistance, to building a five story office ‘tower’ with a bowling alley and gymnasium for the use of his employees, Mr. Keith demonstrated his concern for the wellbeing of his workers.

The following description of the Walkover Club appeared in the 'Walk-over Factory Prints' newspaper, dated August 29, 1919, "As an employee of the George E. Keith Company, you have the special privilege of joining the Walk-over Club and partaking in it's activities, which are many and varied.  Here, within the sight of the Campello factories, we have the finest club of it's kind in the world. A property covering thirteen acres with baseball fields, tennis courts, athletic fields, courts for quoit, croquet, archery and all kinds of other outdoor sports, together with a large, spacious clubhouse where all kinds of indoor activities may be enjoyed, including bowling, pool, billiards, and other amusements, with large cozy rest and reading rooms, with open fireplaces for the ladies. A large assembly hall on the first floor allows ample space to conduct dances, socials and other entertainments. A special feature is the use of shower baths."  Classes in cooking, dress making, embroidery, millinery, reedwork and other subjects were also offered.  All employees of the Walk-over company were encouraged to join the club at a fee of only two dollars a year, one dollar if you lived and worked outside of Brockton. In October of 1919, more than 1600 employees were members. It once stood at the same location as the current Walkover Commons, at 100 Perkins Avenue.

"Mr. Keith also took his civic duties seriously. When Brockton became a city in 1882 he served on the first board of aldermen – now our city council. He was a park Commissioner for many years. In 1909 his fellow Republicans urged him to run for U.S. Congress. He declined, saying "I still feel that I can be of greater value to my own city by remaining at home than by spending one‐half of my time in Washington."  Can you imagine what he would think of the politics of Washington today?

He was an active member of the South Congregational Church, which once stood on the land where Walgreen’s is presently, at the corner of Main and South Street in Campello.

He was also the first President of the Young Men’s Christian Association, what we now call the Old Colony Y. He was one of the first founders of the Brockton National Bank in 1881 and was a charter member of the Campello Cooperative Bank, chartered in 1877. 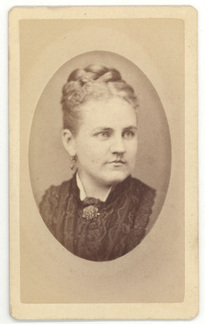 Mr. Keith was married in 1877 to Anna Gertrude Reed, and they had two sons, Eldon Bradford, born in 1879, and Harold Chessman, born in 1884. Their residence, which he erected in 1889, was on the site of the old Keith family homestead, at the corner of Main and Plain streets, the current location of Keith Park. Sadly, Mrs. Keith passed away in 1906, after almost 30 years of marriage, at the age of 51. She is described this way:

"Mrs. Keith possessed a particularly beautiful character, her disposition ever sunny, and hers was a steadfast and enduring friendship. It was an actual pleasure to meet her at all times and her cheering ‐words were an inspiration. In her death, which occurred in Brockton June 30, 1906, the needy and less fortunate lost a true and generous friend, and her family a kind and devoted wife and mother."

Eldon Bradford Keith married and settled into a beautiful home on South Street. He and his wife Lulie had two sons: George E. Keith 3rd and Eldon Bradford Jr.

Harold married Ethel Middlebrook Bowne. They settled into a home at 1363 Main Street in Campello. Trinity Baptist Church is currently in this same location.

In 1908 George Keith married once again, to Susan Elizabeth Archibald.

Mr. Keith passed away after a brief illness at the age of 70 on December 9, 1920. He left an indelible mark on Campello and the City of Champions. His gift of Keith Park is an asset to our community, and the Keith Park Neighborhood Association is committed to making it the 'town green' of our neighborhood – a place to meet our neighbors, celebrate community, and plan for our future.